I'm a rambler I'm a gambler,
I'm a long ways from home,
And if you don't like me well leave me alone,
I'll eat when I'm hungry and I'll drink when I'm dry,
And if moonshine don't kill me I'll live till I die.

That was a verse from the song ‘The Moonshiner’ by the Clancy Brothers. Syd sang this a couple of weeks back the last time I visited him in hospital. It was one of his favourite tunes. He was always smiling when he sang this and had a mischievous twinkle in his eye. The family have pieced together some of Syd’s life based on stories from the family and Friends. Also a book he filled in for Rhiannon a few years ago whereby he has answered some questions about his life . We hope you will all appreciate what a wonderful rich life he has lead and how blessed we all are for having known him.

Early life:
Sydney Victor Murphy was born on December 18th 1924 in Sarn near Bridgend. One if his earliest memories was riding on a horse drawn carousel when he lived in Sarn. The family moved to Pencoed when he was Five. He was five years old when he started school. Favourite subjects were Science Geography; least favourite were Arithmetic and English literature. He played the violin and wanted to be a Boffin (Scientist). The Sports he liked were Rugby and Cricket. One of his best memories of this time was doing concerts with Pencoed Silver Band and it was great fun. He left school when he was fourteen and took an apprenticeship as a bricklayer. It was hard work but enjoyable. He was paid 10 shillings a week & worked 48 hours. He worked like this for 4 years until he was conscripted to the Army.

Army Service:
Syd was conscripted to the army at the age of 18 on 18th March 1943. He answered his country’s call. He was part of what is now referred to as the ‘Greatest Generation’. After basic training in Brecon he was assigned to the Staffordshire Rifles. He was then transferred to the Monmouthshire Regiment which was part of the 11th Armoured Division. The 11th Armoured Division was widely recognised as one of the best British armoured divisions in the Second World War. Syd’s Regiment was originally to be a part of the D-Day landings except their equipment didn’t arrive on time.

They arrived in Normandy on 26th June 1944, 20 days after D-day. The Division was involved in a number of battles and skirmishes in those early months and suffered a lot of casualties. They advanced after the retreating German forces after a battle at Falaise where they suffered heavy losses but received reinforcements from the Royal Norfolk Regiment. The advance covered a stunning 230 miles in six days, from the River Seine at Vernon to the Strategic city of Antwerp and it’s port.

The liberation of Antwerp occurred on the 4th of September 1944 and took one day. Syd was wounded here via machine gun fire, hit 6 times by bullets when clearing houses door to door. He had a cigarette tin and a bible in his breast pocket, the tin was destroyed by a bullet and the bible protected him from the impact. He was 19 years of age when this happened.

He was evacuated to Nottingham to recover but due to the nature of his injuries, Syd spent the next 3 years in different hospitals. At one point he was wearing a full body cast.

Like most men who went to War, Syd never really talked about this period of his life. War is hardest on the people who endure it.

Family:
Syd and Dorothy were married on 5th Of August 1950 in the registration office in Bridgend. 4 years later they were blessed with their first child, Adrian and then 4 years after they had Paul. His favourite place to visit was Ogmore by Sea, he preferred its rugged coastline to that of Porthcawl and he used to take Adrian there Fishing. He has always stated that his most proud achievement in life was his family.

Employment:
He worked for the MoD (at REME in Bridgend) & the Home Office repairing radios. He enjoyed this as he got trips out and about and loved problem solving. He was always in demand in this Job. Adrian recalls the police calling to the house at all hours to take Syd away! But it’s not as bad as you think. When the police had issues with their equipment, they would always send a car to get Syd to resolve the issue, whatever time of night it was, hence their late calling. Adrian even remembers heavy snow falling and the roads unusable, so the Police sent a landrover out to collect Syd.

Syd was also one of the first responders to the Aberfan disaster on 21st of October 1966.

Hobbies:
Syd had a lot of Hobbies. He built an extension onto the house in Maesteg all on his own. He always liked tinkering with radio and electronic equipment in his shed, if he didn’t have a tool he needed then he made it.

Adrian recalls that on a lot of Saturdays he’d come home and see Syd’s legs sticking out from under the car where a repair or improvement was needed. He was hugely passionate about photography. He was even known to take cameras apart to make them even better if he didn’t like the way they were assembled and could figure out a way to have it work better than the manufacturer.

Syd said that he would have liked to have gone higher in school and become a Boffin (scientist) because he liked to experiment with things, especially Radio. But his lack of education never stopped him. If he wanted to learn something he bought a book and took the knowledge from there and improved something he was working on. There are electronic things Syd made in his shed that we think even Einstein would have trouble understanding!

He loved fishing; He used to tie flies in his shed. He loved Astrology and he also made homemade wine. Syd travelled on holidays to Italy, Austria and Switzerland with Dot and Rhiannon.

He loved Electronics. He built a sensor on his car which would sense the rain on the windscreen and engage the window wipers automatically, that was 40 years ago!

Adrian remembers that when he was at the Home office fixing radios, he was often stopped by the police for having no tax on the vehicle, but he would flash his home office ID and be waved on. This even happened coming out of the Police station one time!

Rhiannon remembers that he always wanted a Cwtch. (Welsh term for cuddle!) He loved to have help when he was tinkering with something, so she became his assistant to hold tools or the torch in the shed when he was stripping apart Hi-fi equipment to solder it to make it better.

She also remembers that on a trip to Switzerland, he bought a box of wine and had placed it on the seat beside her on the bus, only for one of the wine bottles to explode and scare her senseless!

Murphy Family Motto:
Fortis et Hospitalis - Brave and hospitable. Syd was definitely that.
Recently his health had deteriorated more and he was in hospital for a number of weeks before he passed away on 30th of March 2015.
The family believe a suitable quote from Terry Pratchet; an author who passed away recently can be applied to Syd:
‘Do you not know that a man is not dead while his name is still spoken?’

Syd will live on in our hearts and memories for a long time yet.

Epilogue:
To Sign off, we give you the Toast Syd always used to say when we were having a drink and which we think personifies him and his Generation:

‘To Sydney Victor Murphy, May you have astonishingly good luck.’

by Steven Cole
From Paddy Kelly

The family of Syd Murphy have informed me of a late change of arrangements concerning his funeral. Please note the revised information as follows:

The date for the funeral is: THURSDAY 9th APRIL 2015

The family would like to inform Syd's former colleagues and friends that they would be delighted to see any wishing to attend the funeral service and at the refreshments afterwards.

Please get in touch with Paddy Kelly if you would like to co-ordinate your travel arrangements on the day.

by Steven Cole
Posted on behalf of Paddy Kelly

It is with deep regret that I learned yesterday, Monday 30th March 2015, of the passing of Sydney Murphy.

I am not fully aware of all of Syd's service details. I know he served in the Army during the War, which resulted in his being badly wounded in one leg. I think he may also have worked in REME at Bridgend before joining Home Office (DTELS) in the era when a lot of Ex-WWII technicians joined the organisation (Perhaps Roy Hodgkinson may have more details?).

Syd was one of the old school gentlemen who always had time and supportive advice for everyone, colleague or customer alike. He was held in high esteem by not just his fellow staff in Bridgend, but also by those based in the other Home Office (DTELS) depots throughout South Wales.

I have asked to be advised of the funeral details and will pass these on as soon as I receive them.

Syd Murphy - A true gentleman who will be sadly missed. 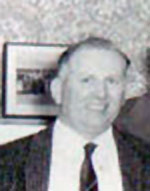